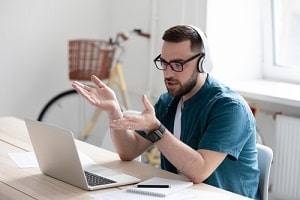 Concerns about COVID-19 have resulted in countless employees working from home. At first glance, it may seem as if remote workers are immune to sexual harassment. After all, if you are not in the office, how could you become a victim of sexual harassment? Unfortunately, many employees are still being subjected to unlawful discrimination and harassment even while working from home. If you or someone you know is experiencing any form of these unlawful acts, it is critical that you seek the guidance of a skilled attorney to protect your rights.

Email or Text Messages May Contribute to a Hostile Work Environment

According to the Equal Employment Opportunity Commission (EEOC), hostile work environment sexual harassment occurs when gender or sex-based remarks or behaviors are severe or pervasive enough to devalue working conditions and generate an abusive working environment. When most people think about sexual harassment, they assume that the abuse involves in-person remarks and behaviors. However, virtual interactions can constitute sexual harassment as well. In fact, it is often easier for a person to make inappropriate or demeaning comments to another individual online than it would be in person. Text messages, emails, and programs like Google Hangouts, Skype, and Zoom are all avenues that may be used to communicate virtually and harass an employee. Remarks made via video and audio conferencing as well as sexually explicit pictures and videos sent over the Internet may also contribute to a hostile work environment. Quid pro quo sexual harassment may occur between supervisors and employees working from home if the supervisor attempts to gain sexual favors in exchange for work benefits.

In one survey, 10 percent of male respondents reported having been sexually harassed at work. Furthermore, almost one out of every five sexual harassment complaints filed with the Equal Employment Opportunity Commission (EEOC) are filed by men. Although men and women receive equal protection under the law against workplace sexual harassment, male sexual harassment victims often face different obstacles than female victims do.

In the movie “Horrible Bosses,” Jennifer Aniston plays an aggressive and exceedingly sexually-forward dentist. Throughout the movie, she repeatedly attempts to convince her male dental hygienist to have sexual relations with her—even going so far as grabbing the hygienist’s genitals against his will in one scene and locking him in a room with her in another scene. Although this comedy received positive reviews, many people have suggested that the audience would not have reacted the same way to this harassing behavior if the perpetrator was the male character and the female was the victim.

Study: Sexual Harassment Is Declining, Sexist Remarks in the Workplace Are Increasing

Researchers from the University of Colorado’s Leeds School of Business polled women in 2016 and then again in 2018 regarding sexual harassment at their workplaces. The survey shows that while sexual harassment is declining in some ways, that there are still issues surrounding inappropriate comments towards women at work.