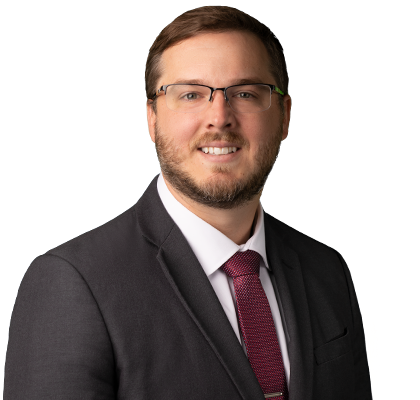 Chad A. Baker joined Mirabella, Kincaid, Frederick, & Mirabella in August of 2022, where he practices family law, criminal law, and other civil litigation. Prior to joining MKFM, Chad worked as an Assistant State’s Attorney in Kane County, where he litigated in felony, misdemeanor, and traffic divisions.

Chad graduated from Southern Illinois University in 2012, where he earned a Bachelor of Science in Business Management. Chad went on to obtain his law degree from Northern Illinois University College of Law in 2019. While at Northern Illinois University, Chad completed the dual degree program which earned him a Law Degree and a Masters of Business Administration. While in Law School, Chad was awarded the Clover Family Award for his accomplishments for achieving the most Pro Bono hours in his law school class and was also named to the Dean’s List. Chad volunteered at Kane County Public Defender’s Office as a 711 licensed student and at Norfolk County District Attorney’s Office as a 303 licensed student.

After graduation from Law School, Chad accepted a position at the City of Rockford’s Legal Department as an Assistant City Attorney. While there, Chad advised the Code and Regulations Committee of the City Council, the Zoning Board of Appeals, the Community Relations Committee, and the Liquor Advisory Board. Chad prosecuted Building, Zoning, Sanitation, and General Ordinance violations. He handled City Foreclosures, Demolition, Small Claims, and Petitions for Administrative Review. Chad advised the Rockford Police Department and Neighborhood Standards divisions in regard to problem properties.

Chad lectures part-time as an Adjunct Professor in the Management Department where he lectures on The Legal Environment in Business. Chad enjoys spending time with his wife and their daughter. He is also an avid golfer and enjoys watching football on Sundays with his family and friends.