Enforcing Child Support Payments after Your Ex Has Left the State 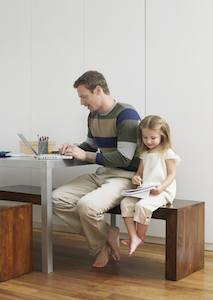 Enforcing child support is often difficult, even when the person paying support resides in the same state as the child. Enforcing child support becomes increasingly more difficult, however, when the parties reside in different states. Not only is it often difficult to find the person who is supposed to pay, but the process of enforcing the support order is also no easy feat in itself and requires the assistance of a skilled attorney to ensure that the order is issued to the proper court.

Historically, when a non-custodial parent moved out of state, the custodial parent had very limited means by which they could recover or maintain the child support payments. In 1920, the United States Supreme Court even determined that support orders were not enforceable under the United States Constitution's Full Faith and Credit Clause. At that time, to enforce an existing custody order, the custodial parent had to establish a new custody order in the new state, requiring him or her to travel to that state and initiate proceedings there. This was a time-consuming, costly, and inefficient endeavor.

A Change in the Support Enforcement Landscape

Between the years of 1920 and 1992, many states still used the United States Constitution's Full Faith and Credit Clause to argue that a support order from one state was a contract enforceable across state lines, which allowed many custodial parents to obtain the foreign state's assistance in garnishing the wages of the parent required to pay support.

In 1992, the process was simplified through the drafting of the Uniform Interstate Family Support Act (UIFSA). This Act has been adopted by every state in the country, including Illinois. Illinois statute 750 ILCS 22 incorporates the UIFSA into Illinois law, and like the other states, Illinois is required to accept and enforce foreign support orders as if they originated in Illinois. This statute enables those custodial parents who have ex-spouses residing in other states to continue to enforce their support orders without having to go to the ex-spouse's new state and begin a new proceeding there.

In addition, in 1994 Congress enacted the Full Faith and Credit for Child Support Orders Act (FFCCSOA) 28 U.S.C. #1738(B). This Act requires states to enforce child support orders of other states, much like the UIFSA does. At this time, state courts are still divided as to whether the FFCCSOA preempts the UIFSA. However, regardless of that issue, the implementation of both acts ensures that a custodial parent gets the support as ordered by the originating court.

Though the statutory changes above have made it easier for parents to collect child support across state lines, there are still some requirements that must be met before Illinois will establish or enforce a support order if the other parent lives out of state. Illinois must have jurisdiction over the non-resident parent, which can sometimes be a complicated matter. The skilled attorneys at Mirabella, Kincaid, Frederick & Mirabella can assist in this regard, in helping determine whether you can collect support in Illinois.

If your ex-spouse has moved out of state and is failing to meet his or her child support payments as ordered by the court, the attorneys at Mirabella, Kincaid, Frederick & Mirabella, LLC are knowledgeable in the statutory requirements for collection of support as well as the best ways to go about obtaining support for your children here in Illinois. Contact us today for a free consultation to find out how we can help with all areas of collecting child support across state lines.