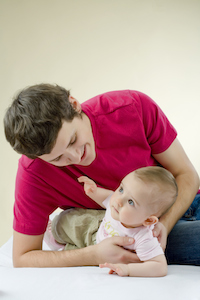 There are many benefits to establishing legal paternity, regardless of whether or not the father plays an active role in the child's life, because certain legal issues can arise for mothers, fathers, and children if paternity has not been legally determined.  Establishing paternity can reduce or eliminate some of those issues.  Additionally, once legal paternity has been established, several beneficial opportunities and legal rights become available.  Some of the issues and benefits that legally establishing paternity can help facilitate include:

Methods of Establishing Paternity in Illinois

There are three main ways of establishing legal paternity in Illinois.  In many cases, the father of the child voluntarily acknowledges that he is the father, through the signing of certain paperwork at the child's birth, or through acknowledging paternity later in court.  In other words, parents can consent to a finding of paternity.  There is also a presumption that a child born to a married couple is the husband's child.  There may also be an Administrative determination of paternity by the Department of Healthcare and Family Services.  Lastly, as discussed below, paternity can be determined through DNA testing if a parent contests paternity.

The parties allowed to bring a paternity suit in Illinois include:

Paternity suits in Illinois can be contested.  For example, if a woman files a petition alleging that a man is the father of her child, that man can go to court and put forth evidence to show that he is not the father.  The same is true if a man files a petition claiming to be the father; the Mother can provide evidence to refute this.  DNA testing is almost always ordered when either party contests paternity.

Additionally, a party can bring an action to declare that a father-child relationship does not exist.  This usually occurs when DNA testing has already determined a man is not the biological father of a child, or when a married parent wants to refute that the husband is the father of a child born during the marriage.

If you need legal representation in establishing or contesting paternity, contact Mirabella, Kincaid, Frederick & Mirabella, LLC for a free consultation today.  Located in Wheaton, Illinois, our skilled family lawyers have years of experience handling paternity suits, and can help you with all issues surrounding the establishment of paternity.
Posted in Main