What Happens to the House in a Divorce? 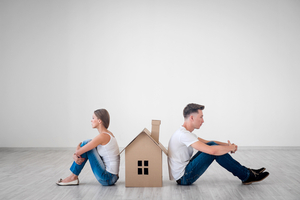 Determining who will get the house is often one of the biggest issues that must be resolved for people going through the divorce process. It is likely that a house is a couple's most highly valued asset, and the decision of what happens to the house is affected by several factors.

Illinois is an equitable division of property state. Hence, property in a divorce is divided as fairly as possible. One spouse may end up with significantly more because the court awards property based on what each spouse contributed to the marriage. If one spouse had significantly higher financial earnings, the division of property may weigh heavily in that party's favor. But, it is important to note that the court also considers the value of a stay-at-home spouse.

Deciding What Happens to the House

Making a decision as to what should happen to a couple's house is complicated—houses are expensive and it is likely only one of the spouses will be living there post divorce. Because of this, if the parties cannot come to an agreement regarding the house, the court may decide that it must be sold. If this happens, the court will assign each party a percentage interest in the house. After the house is sold, each party will receive his or her respective share of the net proceeds from the sale.

Alternatively, one of the parties may continue to live in the house. If this occurs, and assuming the house was purchased jointly, the spouse staying in the house will buyout the other person's interest in it. While this arrangement may be made by the court, it is more likely to occur if the parties agree to it. An agreement between the parties is also beneficial because it allows the parties to come up with just about any arrangement they would like.

In deciding what happens to a divorcing couple's house, the court considers several variables, including, but not limited to, the following:

1. Length of the marriage;

2. Amount of equity in the home;

4. Ability of the person not living in the house to purchase another house; and

5. The incomes of both parties.

Children may be a large factor in the determination because it is likely to be in their best interests to keep as many things in their life as near the same as possible, such as the neighborhood they live in and school they attend. This can be accomplished by keeping the custodial parent and children in the same house in which they had been living.

If you are considering beginning the process to obtain a divorce, it is important that you discuss your situation with an experienced Illinois family law attorney. The legal professionals at MKFM Law can help you with any questions you have related to the distribution of your house during a divorce or any other divorce related matter. Contact us today.