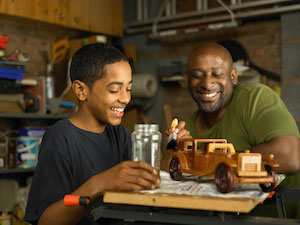 There are two “dueling” bills currently pending in the Illinois legislature that relate to divorce and parenting time (otherwise known as visitation). The passage of one of the bills, House Bill 1452, would introduce sweeping changes to the Illinois divorce laws. The other bill, House Bill 5425, focuses only on setting new standards and presumptions for parenting time for non-custodial parents.

Although there is not one single “standard” visitation schedule for non-custodial parents, a common default arrangement gives a non-custodial parent visitation every other weekend and one or two evenings for dinner during the week. Many in the family law profession believe this default schedule needs to change. In 2008, the Family Law Study Committee was formed to address proposed changes to Illinois divorce law. Members of that committee included family advocates, attorneys, and members of the legislature. Their recommendation was that giving both parents equal parenting time is often in the best interest of the children and, therefore, Illinois law should reflect that idea.

Originally, House Bill 1452 included a provision that gave non-custodial parents almost 60 hours of weekly parenting time. As the bill went through the amendment process, however, the wording of that provision was changed to include language stating the parenting time allocation was “aspirational,” as opposed to mandatory. This change in HB 1452 caused former supporters of the bill to draft House Bill 5425, which only addresses visitation. If HB 5425 passes, the 60 hours of weekly parenting time for the non-custodial parent would be a presumption that the custodial parent could attempt to rebut.

Critics of presumptions for parenting time say that each case should be looked at individually and that HB 5425 could take away some of the court's ability to oversee custody cases and impart judicial discretion. Supporters of the bill, including father's support groups, argue that the 60 hours per week presumption was the recommendation of the Family Law Study Committee and is based on many years spent researching this issue.

Whether either of the above proposed bills will become law remains to be seen; parents facing impending divorce proceedings or disputes regarding visitation should keep a close eye on how these bills could affect them if passed. Family law attorneys will certainly be keeping tabs on these bills and learning how each of the proposals will affect divorce, custody, and visitation litigation. If you have questions about visitation or other issues associated with parenting in a divorce or paternity case, contact the knowledgeable and dedicated attorneys at Mirabella, Kincaid, Frederick & Mirabella, LLC for a consultation and to discuss what your visitation options may be.