Determining a custody arrangement for children of divorcing parents or parents who have never married can be a complicated and complex legal matter. Especially when one or both parents contest a custody arrangement, court proceedings and the interactions between the parents can become extremely hostile and acrimonious.

In 2006, the Illinois Supreme Court established new rules to try to avoid drawn-out custody proceedings that tend to have a highly negative impact on the child or children in question. The Court adopted Supreme Court Rules 900-942 to try to ensure that custody determinations would be made as quickly and as amicably as possible, while continuing to focus on what arrangement is in the best interest of the child. For example, Rule 905 requires family courts to provide mediation programs for parents to try to solve custody and visitation arguments outside of the courtroom. While mediation can be extremely helpful, it does not always work, and it is usually imperative for parents in a custody battle to consult with an experienced family law attorney to understand how courts make custody determinations and to try to resolve a custody dispute efficiently and favorably. An experienced family law attorney can also help parents to avoid contentious custody disputes and work on a mutually-agreeable custody arrangement without the cost and pain of extended litigation. 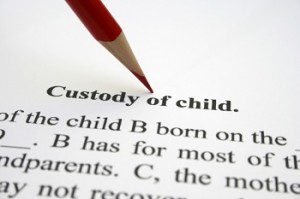 Best Interest of the Child

Like most states, the emphasis in Illinois custody and visitation arrangements is always the best interest of the child. The Illinois Marriage and Dissolution of Marriage Act sets out certain factors courts should examine when making such determinations, including:

These are only some of the factors that courts weigh in making custody decisions, as each case and child is completely unique. The court may look at all sorts of evidence in making custody determinations, including the use of testimony from parents and close relatives, character evidence, financial records, and many other types of evidence. Additionally, courts may appoint a guardian ad litem (GAL) (an attorney trained in investigating custody and visitation issues) to investigate a case and interview the parents, the child, teachers, doctors, and other relevant witnesses to make a recommendation for the court as to what is in a child's best interest.

Overall, child custody determinations are usually complicated and can be very heartwrenching for a family. As a parent, there is always a fear of “losing” your child in a custody battle, and it is therefore imperative to seek representation from an experienced family law attorney, like those at Mirabella, Kincaid, Frederick & Mirabella, LLC, (MKF&M) to avoid this result. At MKF&M, we can help you understand what's at stake and can fight for you and for your child's best interest. Contact MKF&M today to discuss your custody concerns and learn how we can assist you with any custody issues you may be—or possibly will soon be—facing.