Marriage Requirements in the State of Illinois 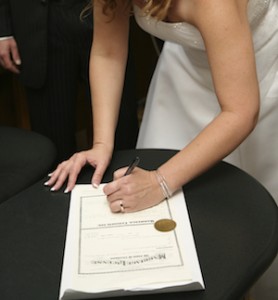 If you have found “the one,” the special person with whom you want to spend the rest of your life; if the ring has been purchased and your beloved has said “yes;” if you've already started planning the celebration of your big day, then an important next step is to examine the marriage requirements for the State of Illinois and make sure that you follow them before you take that trip down the aisle.

First, parties who intend to marry must go to the County Clerk's office in the county in which they wish to be married to obtain a marriage license. The Director of Public Health is charged with prescribing the form for a marriage license application under 750 ILCS 5/202. The application itself is pretty straightforward, but requires some very specific details about the parties. These details include:

In addition, if either party was ever married, he or she must provide to the Director of Public Health the date and court where the marriage ended or, in the event that a party is a widow(er), the date and place of death of the former spouse.

Fees for marriage licenses in Illinois counties range from $30.00 to $60.00. Once the fee has been paid and the application itself has been filled out and signed by each party to the marriage, the county clerk will issue a marriage license. However, there will need to be proof of the following requirements before the license will issue:

Who Can Officiate the Marriage?

The State of Illinois provides, by statute, many officiates capable of performing marriage ceremonies. A marriage may be solemnized by:

After the marriage has been solemnized, the certificate must be completed and forwarded to the county clerk within 10 days of the solemnization.

Although most people do not go into a marriage thinking it will fail, it is always a good idea to think about how you might need to protect yourself in the future. As an individual, you have probably worked very hard to get where you are in life and it is prudent to recognize that and plan for possible hard times ahead. Perhaps you already own a home, you have a business you want to protect, or you come from a wealthier family. You may have some interest that you want to protect—and it's always better to be safe than sorry.

A prenuptial agreement can help in this situation. Such an agreement can provide security when people and relationships are at their worst. If you haven't planned ahead, you risk exposing yourself to financial problems down the road in the event your marriage breaks down. A prenuptial agreement can help define the terms of a divorce, can determine the nature of certain property and the “who gets what” of a divorce, and can help facilitate an efficient divorce resolution long before problems arise and emotions take over in a divorce action.

In the event of a divorce, if the parties have entered into a prenuptial agreement, a court will have to determine that the agreement is valid and enforceable. Therefore, it is prudent to consult with an attorney to help you draft an agreement that covers all potential areas of disagreement but that will also be enforceable in court in the future if needed. The family law attorneys at Mirabella, Kincaid, Frederick & Mirabella are well-versed in drafting prenuptial agreements and can provide guidance and protection for you in the future. Although no one plans to divorce, couples should always plan for the possibility of divorce. Call the attorneys at MKFM law today to schedule a free consultation and find out how we can help protect your future.