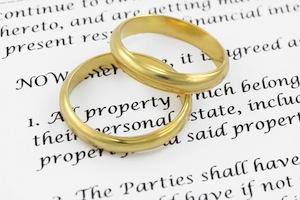 Pursuant to Illinois law, a premarital agreement is an agreement made between individuals who intend to marry each other. The agreement becomes effective once the marriage actually occurs. In order to be enforceable, the agreement must be in writing, signed by both parties, and entered into voluntarily.

It is important to note that despite the validity of a premarital agreement, spousal support may still be ordered by the court if it is necessary to to avoid an undue hardship. The court can do this if there are circumstances that were unforeseeable at the time the agreement was executed. Additionally, while premarital agreements can address many things, they cannot be used in a way that negatively impacts the rights of a child to support.

If the marriage is found to be void, the agreement will only be enforced to the extent required to avoid an inequitable (unfair) result. Marriages can be declared void for the following reasons:

Many individuals do not like the idea of having a premarital agreement because they expressly define each person's rights and put in place a plan for the event that the relationship ends. However, premarital agreements can be very beneficial when structured correctly. If you would like more information related to premarital agreements, please contact an experienced Illinois family law attorney. To schedule your consultation, call MKFM Law today at 630-665-7300.